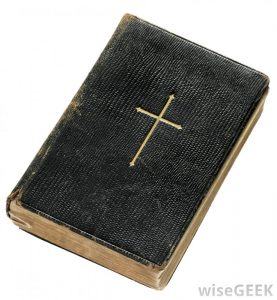 The other day, I arrived at the bus stop where four Asian ladies were indiscriminately passing out New Testament Bibles. When one of the ladies offered me a Bible, I tried to decline. But she was insistent, so I tried to change the subject.

“What church are you with?” I asked.

She said she was with a non-denominational, evangelical church and again offered me a Bible.

“Thanks but I already have one,” I replied.

I realized there was no sense in trying to tell her that my Bible also had footnotes. It was going to be easier to take her Bible than to repeatedly turn her down, so I took it and a tract that came with it.

When I got home, I put the Bible in our entryway where it sat for a month. Finally, my wife asked me to do something with it.

“You can’t just leave it sitting there,” she said.

I decided to take it with me to work. I figured that on my way, I could leave it in a public area where it might end up with someone who needed it. I walked to my bus stop, but because of a traffic jam, I jumped on a different bus than my regular one. After paying the fare, I sat my briefcase down and opened it to put the Bible inside.

A young mother with two little girls was sitting next to me, and she asked, “Is that a Bible?”

“Are you giving it away?”

“Sure you can,” I said, giving her the Bible. Then I flipped through the pages of the tract the Asian woman had given me, and it was a guide on how to read your Bible.

“You’ll probably need this too,” I said, handing it to her. Then I asked, “Just curious – are you a Christian?”

“Yeah,” she said, “but not a very good one,” which opened the door to a good conversation about how Jesus is the only one who can make us good.

A day later, I think back on this Bible exchange and marvel at the perfect timing required to get it into this young mother’s hands. And it all happened because a bold Asian lady was willing to shove a Bible into my hands a few weeks earlier. That lady had no idea what she was doing, but in His sovereign plan, God did.

We have this idea that doing something significant for God requires huge planning, red letters in the sky, a parting of the sea, signs and wonders. But the truth is, He’s working through us in ways we could never arrange on our own.

Regardless, life is full of holy mystery when we walk in faith, recognizing that “all things work together for good to those who love God, to those who are the called according to His purpose” (Romans 8:28).

Joshua Rogers is an attorney and writer who lives in Washington, D.C. You can follow Joshua on Twitter @MrJoshuaRogers and Facebook, and read more of his writing at JoshuaRogers.com.