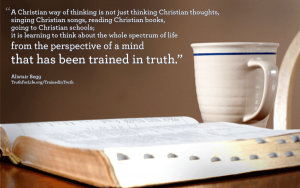 Christianity is the thinking person’s religion.

Or, it should be, at any rate.

By that, I don’t mean you need to be a high-brow scholar, or have an Ivy League education. You need not be particularly gifted when it comes to formal education at all. There are plenty of highly educated people who don’t truly think, after all. They are, as Martyn Lloyd-Jones described in The Gospel in Genesis, “ready to swallow the most dogmatic assertions that lack any vestige of proof whatsoever because they have great names attached to them and because they are made with a great show of certainty” (45).

This shows up in many ways and in many fields. Science, philosophy, politics… even theology or ministry can be a breeding ground for this sort of blind acceptance of whatever dogma is being put forward. But, he says, such behavior is mere rebellion:

Man still defies God and rebels against him merely on the basis of some theory or some dogmatic statement, and then he repeats the whole sorry process. He displays his doubts of God, his hatred of God. He reveals his ingratitude toward God. He uses his own reason and substitutes it for divine revelation. You remember how we are told that when the woman saw that the tree was good for food and was pleasant to the eyes, she started using her own understanding and her own reason. And so she took the fruit and ate it. It is the selfsame process. It happened there at the beginning, and it is still being repeated.

This is why we can’t simply leave “theology to the theologians,” and we dare not be anti-intellectual. We put our minds to work seeking to know God’s will through God’s Word. We take seriously the Bible’s commendation of deep and critical thinking: the call to practice thediscipline of discernment (Acts 17:11

). This is to, like the Berean Jews, test everything against the Word of God. To keep every thought captive, and consider opinions, no matter how lofty, in light of the Bible’s teaching (2 Corinthians 10:5

And when we do this, something amazing happens: We choose that which draws us closer to the Lord, rather than running headlong after that which draws us away from him. We put to death determining right in our own eyes and reasoning, but looking to God’s Word for clarity, whether in explicit command or guiding principle.

We tend to start making decisions that lead to greater joy.