Yellow Pine Christian Church may be one of the Disciple churches you’ve not heard a lot about. Their first building project was in 1902, as part of a logging community near Sibley, La. This one room church served a logging community of 2000+ and in true Disciple tradition opened its doors to all denominations and faith backgrounds. All who worshipped Christ welcome! Later on the lumber 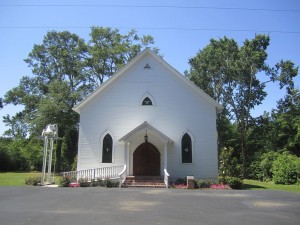 mill closed and moved west but the little one room church remained. Ups and downs were the order of the day; almost closed the doors several times.

Then in June of 2012 several of the Yellow “Piners” got together with staff from the Great River Region. They met and came to see God’s vision of a “beacon of light” shining forth from Yellow Pine Church into the community. Fourteen strong on that day, they continued to work through planning and vision stages and on Nov. 1 of that same year they called their tranformational pastor, Vance Moore.

And now? On Dec. 1, 2013, they celebrated the 112th anniversary by dedicating a new Sunday School/Fellowhip building and had 11 children in the new classes. The following week the Adult Sunday School class had 12 in attendance. Prayer Partners meet on Tuesday mornings with eight to ten dedicated “prayer warriors” who pray for needs in the entire community and an adult bible study class has nine. Moore also is a face of compassion in the community, visiting anyone in the hospital who is on the prayer list and those who are at home get a call or card from members of the prayer team.

Now there are 57 active members with seven baptisms during the last 15 months.

Brother Moore says, “Beacon on Yellow Pine is our emphasis with special attention to children. Our community is a small town 7 miles south of Sibley, a small, one-light town of mostly small businesses, many in the depressed oil industry. Three people believed that if we committed to a Sunday School/Fellowship building and got the word out into the community that we would grow.”